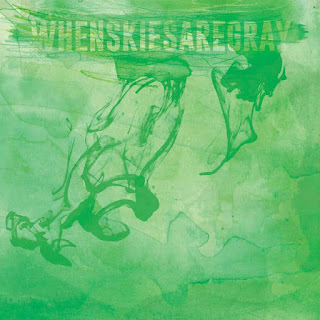 /when skies are gray by when skies are gray\
1. Her face in the grass
2. We passed each other quietly
3. Wayfarer
4. Bloodletting
5. The widows walk
6. The things I once cherished, now indiferrent
7. Subdue and consume
8. The tundra of my heart, my tired frozen heart
9. It's certain that I'm dying
10. Renoir, 1920

Dark emo violence// melodic emo pop punk outfit, When Skies Are Gray, shows off it's gritty, teeth grinding emotion that brings your blood to a depressing boil. The cathartic yelling over catchy emo Pop punk instruments smash your face while the melodic, soothing instrumentals make your head away back and fourth. I can see this as something I can come back to over and over again.


Everything beautiful is gone

Woah there grab your sing along pen and write in your diaries, because this shit makes you wanna think about how shitty things are while at the same time thinking about how much you don't care when really maybe things aren't 100% bad but you don't think about that because you're listening to this guy say everything you're thinking but because you aren't good at putting into words what you're thinking the way you want to, you can't say, you'll go post these lyrics on Twitter and tumblr and others will feel what you're saying  but will have no idea what you're talking about//referencing so people will think you're deep and you'll get that cool girl/guy you've had a crush on forever to think maybe you aren't just another SnapBack wearing fuck boy so you guys will date and things will be great at first but after a few months things will go south and you'll start listening to that basement album but you feel so much about her and also hate being alone so you'll stay together and be in a toxic relationship that doesn't help either of you so you'll get with some of your friend and make a band when you guys break up and try to make it sound like this album but you'll realize when skies are gray is too good of a band to recreate and also your drummer probably sucks a lot so rinse and repeat.

Anyway, this album is really really great and it was released through mayfly records so check that out, good label and I would love to see these guys live and you should get this album.

Favorite track: we passed each other quietly
Bandcamp

Me when I put this album on